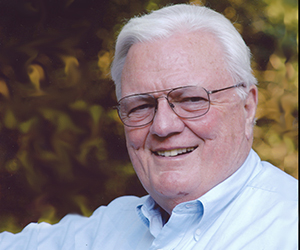 Longtime Vanderbilt faculty member, Julian Gibbs, Professor of Radiology and Radiological Sciences, Emeritus, died October 25, 2012 at age 80. A native of Northwest Alabama, Julian studied sciences at the University of Alabama and received his DDS from Emory University in 1956. After serving in the U.S. Air Force and practising dentistry in Vernon, AL, near his family home, he developed an interest in the intersection of radiation biology and dentistry. He received his Ph.D. from the University of Rochester, New York in the field of Radiation Biology and Biophysics in 1969 and joined the Vanderbilt faculty in 1970. Dr. Gibbs’ early research centered on radiation effects on cell cycle kinetics and later on risk assessment associated with medical and dental radiography. He was a pioneer in applying computational techniques to studies of radiation dose distribution to critical organs. More recently, Dr. Gibbs focused on research involving magnetic resonance imaging of the temporomandibular joint and localized spectroscopy. He was a diplomate and former president of the American Board of Oral and Maxillofacial Radiology, a fellow and former president of the American Academy of Oral and Maxillofacial Radiology and a member of the National Council on Radiation Protection and Measurements Committee. In this latter capacity he was the co-chair for the NCRP report on Radiation Protection in Dentistry and a committee member on the NCRP report on Implementation of the Principle of As Low As Reasonably Achievable for Medical and Dental Personnel. During his career, Dr. Gibbs authored or coauthored more than 150 articles, chapters and presentations, including the Radiology Centennial Oration at the 1995 Academy meeting in Chicago. Among his many interests, Dr. Gibbs was a passionate supporter of the Boy Scouts of America for over 40 years. He was also especially fond of bow ties, everything associated with Vanderbilt, and choral music and enjoyed participating in the choir of Belle Meade United Methodist Church where he was a member for 42 years. He is survived by Emily, his wife of 54 years, three children and six grandchildren.

Those of us privileged to know Julian remember him as an unusually gracious and effective member of our profession. Julian had a warm heart, quick smile and was a friend to all. He served as a mentor to young members, was imaginative in administrative positions, generous with his time when helping others, and elevated the level of discussions with his formidable intellect. Julian was the scientific conscience of our specialty, and when Julian spoke, we listened. He was a giant in our field, a true gentleman and we miss him.

We thank Julian’s family for much of the content of this remembrance.